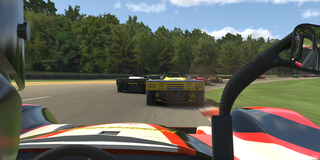 A world-wide pandemic can suspend a lot of activity, but it can’t smother an SCCA member’s desire to have fun with cars, nor squash the competitive spirit so closely entwined with the Club.

A balance of those needs and temporary social distancing guidelines opened the door for the first SCCA eSports Super Tour at Summit Point Raceway on Saturday, with an overflow cadre of competitors ready to strike.

Saturday’s race, hosted on iRacing, was a bit of a cold open to a prospective series of SCCA eSports Super Tour events that would follow a similar schedule to its real-life counterpart and become a permanent part of the SCCA’s rotation of activities.

With fans and spectators watching the screen, three run groups – Spec Racer Ford, Skip Barber Formula 2000, and Global MX-5 Cup – were run, with each room holding the first 40 entries for each group.

Real life road racer, autocross national champion, and sim racing superstar DJ Alessandrini earned the day-long MVP award, inserting himself in the mix of all three races and coming out with a pair of gold medals and a silver.

Spec Racer Ford: The day’s opener was a thriller, with Alessandrini and David Gaspers, one of the top iRacing racers and an expert on the SRF in the platform, gapping the field on Summit Point’s 2.1-mile, 10-turn circuit after an early incident saw polesitter and event host Steve Ray collected by a spinning car along with all-around driver Tom O’Gorman near the front of the field.

The breakaway set up a last-lap showdown and a situation that is unbelievably exciting on a simulation and decidedly less so in real life.

Gaspers had Alessandrini running him down, and the draft at Summit Point gave the second-place runner a huge tow. Looking ahead with clear vision, Gaspers went by a lapped car with inches to spare just as Alessandrini began to make his move, sending Alessandrini hard into the rear of the virtual competition and giving Gaspers all the room he needed. The square hit launched the lap car, but allowed Alessandrini to continue and finish in second place.

The third-place battle was equally exciting, with Max Grau and Caleb Patrie battling all race long with British racer Hugh Haycox. Patrie, pushing hard on the final lap, ran wide and spun, allowing Grau to complete the podium with Haycox in fourth. Patrie completed the top five, with O’Gorman showing skill from the early race incident to recover and finish sixth.

Skip Barber Formula 2000: Looking more like a Formula Vee race than an F2000 race, O’Gorman and Jeremiah McClintock – namesake of the SCCA Solo program’s McClintock-Berry Cup – led the field away at the green, but Alessandrini, from fourth, and Evan Rakusin, from seventh on the grid, joined O’Gorman up front for a three-way race for the lead.

A 20-minute battle set up a final lap dash to decide the podium. Using the draft down the long straight to get the white flag, Alessandrini moved to the inside of O’Gorman in the right-handed turn one. O’Gorman, not ready to give up the position, slapped wheels with Alessandrini but got the worst of the deal and was bumped wide.

Rakusin had the opening he was looking for and moved into prime position on the final lap. Using the same draft that Alessandrini did a lap prior, Rakusin moved to the inside of the track as the pair approached the checkered flag.

The straight was just too short for Rakusin, however, as Alessandrini crossed the line with a nose in front by just 0.045-second.

O’Gorman continued in his car, now slightly damaged, and held off McClintock for third by just 0.007-second for the final spot on the virtual podium.

Global MX-5 Cup: No surprise after the thrilling opening rounds, but a field full of Mazda MX-5 machines once again became a battle of who could make the fewest mistakes.

Also to no one’s surprise, that driver turned out to be Alessandrini, who held on for a 0.472-second victory over O’Gorman. The pair started on the front row where O’Gorman led the opening stanza and Alessandrini climbed to the point for the final 14 laps of the 20-minute race.

The dynamic duo led a charge of as many as 10 cars in the lead line during the opening minutes of the race, with Patrie, Richard Spicer and Jake King in the mix for the meat of the race.

O’Gorman held off the challenge for his second-place run, but that gave Alessandrini everything he needed for a win.

Patrie, King and Spicer completed the top five in the race.

All three races were live streamed by SYM TV and are available to view on SCCA’s YouTube Channel here.

More information about the continuation of the SCCA eSports Super Tour will be available soon at SCCA.com.