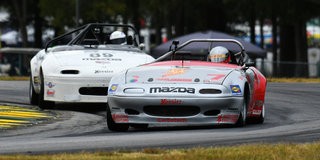 ALTON, Va. (October 13, 2019) – Six official lead changes at the line and perhaps twice that number on the track set the stage for a 0.096-second difference at the finish line between race winner Eric Prill, of Topeka, Kansas, and runner-up Charlie Campbell, of Corry, Pennsylvania, in F Production on Sunday during the SCCA National Championship Runoffs at VIRginia International Raceway (VIR). Ken Kannard, of Sebring, Florida, outlasted a difficult battle of his own to finish third.

Prill was the leader as the green flag flew, with Campbell coming out in front of an early battle with Craig Chima before a lap two full course caution bunched the field again. From there, Prill’s No. 7 MaxtonsFight.org/JPM/Hoosier Mazda Miata and Campbell’s No. 89 JPM/Carbotech/Hoosier/Barrington Mazda Miata were evenly matched through the race and a step ahead of the rest of the field, pulling ahead from the lap four restart and marching away.

Seemingly each and every lap of the remaining 12 green-flag laps, Prill and Campbell swapped positions at the end of the back stretch and down the front straight and into Turn Two, with Prill establishing on one occasion that he had the ability to draft by Campbell before the finish line, if needed.

Those lead changes left Campbell at the front entering the final lap. He held that position through “Oak Tree” before Prill took over the lead at end of the long back straight. That left Campbell with essentially five corners and part of the front straight to erase the lead, and he nearly did – pulling alongside but not in front of Prill at the checkered flag.

“Coming down the hill, I was thinking that I just needed to get a good run coming out of Hog Pen,” Prill said of the last corners of the race. “The rear stepped out just a little bit. The last couple of laps, the rear was stepping out in a few places just a little bit. I just had to breathe the throttle a little bit and it caused him to check up a little bit too.”

It was enough, as Prill covered the 15 laps, including two under full course caution, in 35:19.435 (83.315 mph) for his second Runoffs win following an F Production title at Indianapolis Motor Speedway in 2017. His final lap of 2:08.076 (91.914 mph) was the fastest of the race and established a new class track record. Prill also became the just the third SCCA member in the Club’s 75-year history to win a road racing title and an autocross National Championship in the same season, joining Bob Endicott and Jeff Altenburg.

“For me, Indy was relief,” Prill said. “I finally got the monkey off my back. I’d been second so many times, so close. Just everything that went on, the build up to it, I was relieved. This was more exciting. This race was so exciting. I knew it was going to come down to the last lap and I was thinking about it for the 10 laps prior to that. Where do I want to be, and if I’m not there, what do I do? We’ve run like that before, and it’s been great. Hats off to him, it was so much fun. It’s just a great feeling.”

Campbell scored his best career Runoffs finish with the silver medal after three previous third-place finishes, and couldn’t have been much happier.

“That was an intense race, but it was so much fun,” Campbell said. “I’ve had a lot of hard losses, but this is not one of them. Second place is almost as good as a win. Almost. That’s racing. When I was behind, I was eyeing up Eric to see where I could get him. When he was behind, I’m sure he was doing the same thing. To be able to put on a show like that with Eric, it’s great.”

Behind the lead battle was a four-car battle that became a fight for the podium when Kevin Ruck, who was forced to swap back to an old motor before the race, dropped out of the race just before the one to go indicator.

Kannard had spun his No. 51 Northwest Cable/Mazda/Hoosier/G-Loc Mazda Miata on the restart when the track was more slick than it appeared after a light rain shower. Kannard fell to 10th, made up two laps on the opening lap, and then ran in a pack that included Mason Workman, David Bednarz and Robert Garrison. Kannard eased ahead of that pack by the finish, with Workman, Bednarz and Garrison behind in order.

“We were testing the track all the way around behind the pace car, and I didn’t think it was that bad,” Kannard said of his spin. “Then we were battling hard. Nobody was giving up anything, it’s the National Championship. They’re not giving you an inch, of course, so you’re trying to pick a good spot to pass. We had a real good race, a real safe race, and it turned out in my favor at the end.”

Bednarz, who started 10th in his No. 47 DynoMax Exhaust/Ohlins USA Mazda Miata, earned the Sunoco Hard Charger with his fifth-place finish.

Live, online video coverage of Runoffs races, presented by Mazda, is available throughout the three days of competition at SCCA.com/live. An audio race call, supplied by the Super Tour Radio presented by Hoosier Racing Tire broadcast team, is also available at www.SCCA.com/live, as well as live timing and scoring for each National Championship race.