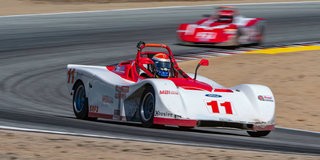 The Spec Racer Ford Gen3 (SRF3) class generated several fantastic races this year, and this weekend was no exception on WeatherTech Raceway Laguna Seca’s 2.238-mile, 11-turn circuit. During Saturday’s 25-minute SRF3 race, T.J. Acker jumped out front early and led most of the race until Mike Miserendino, driving the No. 11 MBI Racing car, took the lead and went on for the win. On Sunday, Acker again took the front spot at the start and was ahead when a full-course yellow came out after eight laps. But on the first racing lap after the restart, Acker went out with a mechanical issue and it was Umberto Milletti who briefly took the lead. Soon enough, however, Miserendino made a pass for the top spot and went on to victory, sweeping both races for the weekend.

Miserendino has competed at a number of Hoosier Super Tour events over the last couple years, and claimed many, many victories. What keeps him coming back? “Checkered flags. They’re fun to get,” Miserendino joked.

“But in all seriousness, it’s the comradery,” Miserendino added while his two young children stood alongside him on the victory podium. “We race with a great group of people. We have fun doing this and the racing is just kind of a bonus. We just keep coming back, and we’ll keep on doing it.”

Speaking of “it,” Super Touring® Under racer Nathan Pope got “it” done this weekend as he swept class wins both days, but not without a lot of work and some timely decisions. On Sunday, competitor David Fiorelli and his Subaru BRZ had the pole and immediately moved to the lead at the start. About five laps in to the 35-minute race, Pope and his No. 24 El Dorado Motorsports Honda CRX found a way around Fiorelli. For the rest of the race, the duo was nearly nose-to-tail on track as Fiorelli hounded Pope one lap after another. In the end, Pope held strong and claimed the Sunday victory.

“It was a longer race today and I knew my tires would last a little bit better because I’ve got a lighter car,” an exhausted Pope said after the race. “It’s a lot less stressful running second, but I knew I maybe wouldn’t get another opportunity to get around David. So when I saw the chance, I took it. I needed to make something happen.”

The Super Touring® Lite race was certainly a happening, too, thanks to competitors Thomas Lepper, Wilson Powell and Morgan Trotter. To begin the race, Powell made an incredible start to gain the lead. Lepper was able to grab the top spot after a few laps, but Trotter filled his rearview mirrors in second and applied a lot of pressure. As race laps dwindled, Lepper was able to pull away and secured the win in his No. 42 Thomas Lepper Associates Honda Prelude.

“I wanted to make sure I conserved tires, but I also had to make sure I stayed in front of Morgan,” Lepper noted after the race. “Morgan just never gives up. It gave me a little motivation and I kept him behind me.”

Prototype 2 (P2) produced quite the thrilling race Sunday. Tim Day Jr., who has numerous Hoosier Super Tour wins on the season in his Stohr WF1, was again out front when a second full-course yellow bunched up the field late in the 35-minute race.

After the restart, P2 action got hot and hectic. The win was up for grabs, and several determined P2 warriors had their eye on the prize. Things got crazy amongst the top four drivers, and Chuck Bona in his No. 42 Campbell Dental Care and Aesthetics/Kevin Mitz Motorsports/One Motorsports Stohr WF1 got alongside Day for the lead. Day fought back, but the move sent him off track with some mechanical damage resulting. Bona forged ahead for the win with Robert Kazen, driving a West WR07, and the Stohr WF1 of Kevin Mitz closing out the top-three positions.

“It was just back-and-forth the whole race. It was close the whole way through,” a grinning Bona said afterwards. “Kevin Mitz went flying by me at one point, and Tim Day was just fantastic. It was crazy. It was just totally amazing. A great time and a great weekend.”

GT-3 races this weekend at WeatherTech Raceway Laguna Seca were part of the new GT-3 Challenge presented by MPI -- a series supported by Mazda, Max Papis Innovations, Penske Racing Shocks, AiM Sports and Hoosier Racing Tire. By winning both races over the weekend, Collin Jackson and his No. 53 Specialty Engineering Nissan 240SX became the GT-3 Challenge representative from the Western Division at the 2019 VIRginia International Raceway SCCA National Championship Runoffs® in October. That is where the four  GT-3 Challenge Division champs can faceoff during the year-end SCCA event for overall GT-3 Challenge championship honors.

While the 2019 Hoosier Racing Tire SCCA® Super Tour’s 11-weekend season is now complete, there exists one last chance for drivers to earn points toward the Hoosier Super Tour Nationwide Points Championship. That opportunity comes in October at VIRginia International Raceway during the 2019 SCCA Runoffs®, which is a points-earning opportunity for competitors.