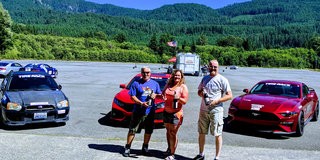 For the second weekend in a row, competitors gathered in Packwood, Washington at the Hampton Mills Old Lumber Yard for the 2019 Tire Rack SCCA Packwood ProSolo®.  Cones were a common frustration throughout the weekend as an "eyebrow" element and offset slalom at the finish made getting a clean fast run very tough. More than normal, competitors were saying, "I'd have won if it wasn't for that pesky cone!"

Street Touring Xtreme drew the most competitors with 16 drivers. Going into Sunday, the five trophy spots were separated by less than 0.100 second with Mike Yanaze and Justin Tsang tying to the thousandth. The top nine drivers found time on at least one side Sunday morning, spreading out the standings a bit more. Glen Hernandez took the class win by 0.153 second over David Santel. Tsang and Yanase broke their tie to claim the third and fourth place trophies respectively. Scott Dixon claimed the fifth and final trophy.

Classic American Muscle was the second largest class with 15 drivers. James Paulson took a fairly comfortable win in his Ford Mustang by 0.545 second over a charging Scott McHugh in a Chevrolet Corvette. David Rock finished off the podium, just 0.018 second back, but 0.203 second ahead of James Darden in fourth. Jeff Woodbury claimed the final trophy in fifth. Paulson went on to win the Super Challenge, his first, by eliminating Adam Ruff in the Top Eliminator round.

C Street may have been less than half the size with seven cars, but the results show only a 0.480-second gap from first to sixth, making it one of the closest battles of the weekend. Eventual Super Challenge Runner-Up, Adam Ruff, led the class throughout Saturday and through the first drivers on Sunday. That all changed though when he threw the keys to co-driver John Tritsch who may have only improved on one side but found 0.548 second to take the lead from his co-driver by 0.209 second. Ben Pullen claimed the third and final trophy, but Sean Velandia, after finishing fourth in class, stayed clean and took third in the Super Challenge.

Plenty of drivers at the event have experience on the Packwood surface, but in Street 2, two of the fastest faced off with Ron Bauer and Keith Brown taking off with the class lead. After Saturday, Bauer led, but both drivers improved on Sunday morning. Brown found several tenths to take the lead from Bauer who coned his final, with a raw time that would have retained the lead. Brown took the class win over Bauer by just 0.096 second and Ryan Johnson completed the podium in third.

Eleven ladies filled the Ladies 2 class with Annie Gill taking a dominating win by 1.288 seconds. She’d go on to win the Ladies Challenge on Sunday afternoon. Ewelina Szarkowicz, Lacey Otis and Dawn Danton claimed the second through fourth place trophies in the class, separated by just 0.383 second. In Ladies 3, eight drivers, including those who bumped from Ladies 4, battled for the win. Kate Fischer emerged victorious with just a 0.134-second margin of victory over Deanna Carter. Jessica Podhola claimed the third and final trophy with Crystal Stegman missing a trophy by just 0.049 second.

Christopher Miller of Street 1 claimed a free ProSolo entry at an upcoming event by winning the Bonus Challenge.

Complete results from the 2019 Tire Rack SCCA Packwood ProSolo can be found here.