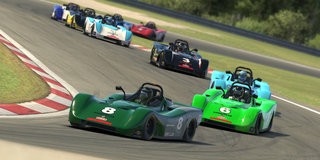 We are sitting on the halfway mark of season two of the SCCA Spec Racer Ford Challenge Presented by the Skip Barber Racing School on iRacing.com and over 350 drivers have joined the action! That is making for some pretty solid action on the track. We have made a change to the way we track the races for season two, making it a little easier to watch from the outside. Instead of individual race action, we’ll be taking a look at the points race and focusing on how that battle is shaping up week to week.

The season thus far has been a status quo with Zachary Le Vey leading the points so far, but he has some tough competition not far behind with Tommy Bordeaux just 25 points back. A new face, John Young, was able to bump Dustin Decker off the podium this week to round out the top three. That position is far from secure though as Decker only trails by 4 points!

From there, fifth, sixth and seventh are all separated by less than 80 points, which puts most of the top ten in a tight battle. A surprise finish at any single race could really shake up the rankings. New-comer Steve Owens is doing well to slot into seventh place, just 39 points behind Brett Holton, who was in and out of the top five all last season.

Here are the top 15 in the standings this week:

This season is only at the mid-point so there is lots of racing left and lots of battles yet to come! Around this time last season, Tommy Bordeaux was able to upset the entire podium by pushing himself all the way to the top step displacing Zachary Le Vey. This season Le Vey seems to have a slightly firmer grasp on his lead, but it is truly anybody’s race. If you want to be a part of the action, sign up here. Races are going all week long and are scheduled about every two hours during the evenings, so there are plenty of chances to get your name on the board. You don’t even have to race every week to stay competitive. Log on and get to racing!