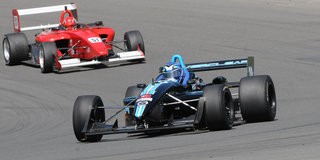 WATKINS GLEN, N.Y. (June 23, 2019) – Sunday at Watkins Glen International was the last Hoosier Racing Tire SCCA® Super Tour race east of the Rockies this year. As such, many competitors based in the eastern portion of the United States had one final shot at claiming a Hoosier Super Tour win during the event hosted in New York by SCCA’s Finger Lakes Region.

The Spec Miata class saw a repeat winner Sunday with Elivan Goulart, in the No. 70 KRUGSPEED/SCDA1.com/Kessler Engineering/SCDA Driver Development Mazda Miata, positioning himself in front of Tyler Kicera and Danny Steyn before a full-course caution came out on lap nine and ended the race early for contact back in the 23-car field.

Calvin Stewart, the overall and Formula 500 class winner with one lap to go, pulled out of the lead and let the Formula F drivers wage a fantastic battle.

Dexter Czuba, Tyler O’Connor and Josh Green all took turns at the front of the Formula F field during the race. But Green, driving the No. 82 Dufour Aerospace Mygale, was in front by 0.050 at the stripe.

“All three of us were bumper to bumper the entire race,” Green said. “There was a lot of strategy the two laps before with each of us placing ourselves and trying not to lead onto the back straightaway. Tyler set that up the best by being third and having a two-car draft, but he just didn’t suck up enough. I was able to lead through the back section, and when I was able to defend going into turn eight, that was enough for the win.”

A 14-lap race with no caution flags allowed Tim Kezman’s No. 44 Porsche 997.2 to turn the tables on Kurt Rezzetano’s Pontiac Firebird in the Touring 2 class.

“It started the way it should have,” Kezman said. “Kurt jumped ahead, and we stayed with him a little bit. We tried to wear him down. We got lucky we didn’t get a yellow this time. We just out lasted him. He probably burned his tires off a little bit. It was a good race.”

Winged open-wheel cars and Prototypes saw a full-course caution with a green flag coming back out with three laps to go. That gave Ahsen Yelkin an opportunity to keep his No. 79 Everclear Swift 014 Formula Atlantic in front of Larry Howard to the finish and take an overall win. Yelkin powered away in the straights, but saw Howard close up under braking.

With temperatures climbing throughout the day, the Production and Big Bore groups had a hot, slippery track to contend with. It didn’t slow the racing, however.

Eric Vickerman, in the No. 10 The Vickerman Gang Austin Healey Sprite, dashed away from VW Rabbit drivers Jason LaMatta and father Vincent LaMatta in H Production. The LaMattas finished on the podium behind Vickerman, with father Vincent earning the silver medal.

“It’s a hot day out today,” Vickerman said. “Vince got the best of me on the start and dashed out a little bit. I just put my head down and tried to pull away a little bit and pace myself. It was a long race today.”

Jim McAleese drove his No. 03 McAleese & Associates/Jetco Engineering Chevrolet Camaro to a GT-1 win on Sunday after a mechanical ended his day just three corners from the checkered flag on Saturday.

“Everything was great today,” McAleese said. “The car held together like a beast. This is so much fun. The traffic with us racing together, we’re completely side by side the entire race. This is really racing. It’s completely awesome. I had more fun out there than I’ve had in years.”

In the same group, Amy Aquilante and her No. 57 TAR/Hoosier/Hawk Pontiac Firebird held off the Chevrolet Camaro of Philip Smith for an American Sedan win.

“It was a blast out there,” Aquilante said. “We finally got the car to finish. We had a little bit of issues yesterday but, man, it was hooked up out there. It was a fun race. Me and Phil were going at it for a while and, luckily, we were able to get through traffic smoothly and keep together. It was a blast.”

The Hoosier Super Tour now moves back west to California for the series’ final 2019 event July 26-28 at WeatherTech Raceway Laguna Seca. Follow all the action live at www.scca.com/live.