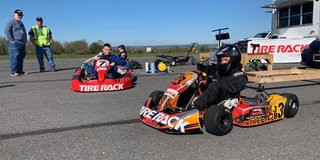 The Tire Rack SCCA Solo® Championship Tour resumed this past weekend in Romulus, New York for the 2019 Tire Rack Finger Lakes Championship Tour. Over 250 competitors took to the Nationals-style courses while enjoying mild weather and breath-taking views in the evenings.

The B Street competitors came to the Seneca Army Depot ready to battle.  After Saturday, Talha Sadik led over Jadrice Toussaint by 0.034 second with Christopher Laprus in third and Jeremy Pittenger in fourth. The top four positions were separated by less than 0.3 second. On day two, in drying conditions, Toussaint took the lead on his first run, but Sadik took it back on his second run. As second runs continued, Laprus took over the lead, before Pittinger took to the course and set a time that couldn’t be matched. On his third run Pittinger, found even more time, cementing the win with a 0.644-second margin of victory over Toussaint. Sadik claimed the third and final trophy position.

The 15-driver A Street class had tight battles throughout the ranks, except at the top of the results. Both days, Todd Kean found speed early before improving to set the fastest times of each day. His margin of victory over friend and former co-driver, David White, was 1.375 seconds. Behind White, the margins shrink significantly with only 0.020 second gap back to Cody Hunt in third. Yury Kholondyrev was only another 0.169 second back in fourth and Erik Carlson completed the trophies in fifth, 0.712 second behind Kholondryrev.

For the second time this season, Brian Karwan emerged victorious in Street Touring Roadster at a Tire Rack Championship Tour. The first being in Charlotte, North Carolina in March. This time he did it with a 0.392-second margin of victory over Mark Dudek. William Koscielny completed the podium in third, 0.129 second behind Dudek. Mark Shrivastava, Brandon Dryer and Nathan Young rounded out the trophies in fourth through sixth respectively.

While Tommy Layton may not be a nationally-known name, he’s a fixture in the Washington, D.C. area. He showed his strength this weekend by taking the F Street win by nearly a second over Win-hou Chow in second and former SSM National Champion, Jake Namer, in third. After an engine failure in the SSM RX-7 a few weeks ago, this was Namer’s first event in the “back-up’ car, a 2012 BMW M3. Jon Caserta claimed the fourth and final trophy spot in the class.

The reigning D Street Prepared National Champion, Evan Schickel, showed the way in Street Touring Xtreme, sporting his newly-prepared Mazda RX-8, after a small mishap on his first run that landed him in the mud. Good Samaritan Rich DiMarco, who won Street Touring Sport this weekend, helped push him out of the mud and for his trouble, Schickel gave him a mud bath. When DiMarco was done, he was completely covered in mud. That didn’t faze Schickel in his pursuit of victory. After claiming the two fastest times of day one on his second and third runs, he avoided the mud on Sunday to take the win by 0.325 second. James Tatad and Dennis Barrett claimed the second and third steps on the podium respectively. Lex Kirichek and Alex Meramo completed the trophies in fourth and fifth respectively.

The Tire Rack Championship Tour continues this weekend in Lincoln, Nebraska as the second half of the Spring Nationals double header. More information about these events can be found here.