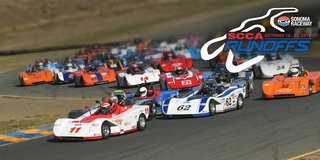 TOPEKA, Kan. (Nov. 30, 2018) -- For a second year in-a-row, households throughout the United States will be able to experience the excitement and energy of SCCA® racing when select National Championship Runoffs® events from Sonoma Raceway air on CBS Sports Network in December.

The exciting Formula Vee® Runoffs race then airs at 9 p.m. on Sunday, Dec. 16, and the Spec Miata race at 9 p.m. the following Sunday, Dec. 23. Encore presentations of each broadcast will also air on CBS Sports Network on Dec. 30 with a marathon beginning at noon and including the final two premieres -- a combined Formula F/Formula 500 event at 6 p.m. followed by the F Production race at 7 p.m.

Mike Cobb, SCCA President and CEO, said exposure on CBS Sports Network gives the Sports Car Club of America® an opportunity to showcase its exciting brand of road racing on millions of televisions in homes across the nation.

“The eight races selected for broadcast this year were chosen based on the quality of competition, the ability to connect with a wide audience, and the desire to display a spectrum of SCCA Road Racing activities,” Cobb said. “It is my hope that every SCCA member will tell friends, family, co-workers, neighbors and acquaintances that the Runoffs will be airing Sundays on CBS Sports Network in December. It’s a great way to share with others exactly what SCCA Road Racing is all about.”

The SCCA National Championship Runoffs has evolved into what is now commonly agreed to be the pinnacle of American motorsports. Since 1964, the SCCA has crowned Road Racing’s National Champions at the winner-take-all, single race Runoffs format through dozens of separate races over three days.  As host of the 55th Runoffs, Sonoma Raceway became only the third California track to host SCCA’s National Championship, joining Riverside International Raceway and WeatherTech Raceway Laguna Seca. Each race on Sonoma‘s 12-turn, 2.52-mile circuit was 20 laps or 40 minutes, whichever came first.

With broadcasts presented by Mazda, all 28 Runoffs races from Sonoma Raceway are available for online viewing anytime at the 2018 SCCA Runoffs OnDemand webpage at SCCA.com.

The Sports Car Club of America®, Inc., founded in 1944, is a 67,500-member motorsports organization that incorporates all facets of autocross, rally and road racing at both Club and professional levels. With headquarters in Topeka, Kansas, the SCCA annually sanctions over 2,000 events through its 116 Regions and subsidiary divisions. Much of the SCCA’s activities are made possible with support from the following Official Partners: Chevrolet, the Official Truck of the SCCA; Hawk Performance, the Official Brake Products of SCCA; Mobil 1, the Official Oil of SCCA; Sunoco, the Official Fuel of SCCA; and Tire Rack, the Official Tire Retailer of SCCA. To learn more, please visit www.scca.com.